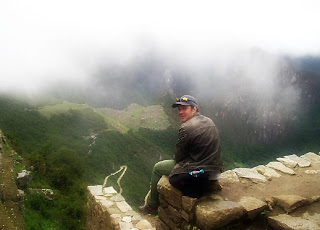 When you were a child, what did you want to be when you grew up—and why? How did it all turn out?

I suppose the first thing I was interested in being was a lawyer simply because my dad was a lawyer. Although your earliest ambitions generally end up much different in practice than what they were when you initially dreamed them, oftentimes there are some pretty strong roots of similarity. In some ways, I suppose pursuing a degree in English literature (as I did) is similar to law since it's essentially communication and the art of argument.

The first time I seriously considered writing as a career was when I got a story published in a small journal as a freshman in high school. However, writing, as most people well know, isn't great for a consistent, stable income. In order to "feed my writing habit" as I like to say, I eventually moved to Lima, Peru where I could live inexpensively. While I was there I worked as a teacher, translator, and editor as well as a freelance writer. I have to admit, there were plenty of nights that I laid awake wondering if I wasn't making a terrible mess of my life. All my friends were putting in their time toiling away in entry-level jobs at major corporations with the hope that one day it would somehow pay off. I, on the other hand, was a complete free-agent, and it seemed that if the writing didn't turn out I'd be in big trouble in the future. I usually managed to pacify myself by rationalizing that at the very least I was becoming fluent in Spanish and that, at least, should be a marketable skill.

It all seems to have worked out however. I think anybody will fall victim to a little bit of fear and trepidation when they set off to follow their dreams. In the end, I guess you have to ask yourself whether the fear of giving up the stability of a conservative/traditional life outweighs the fear of not pursuing whatever it is you feel is your destiny to pursue. I've tried giving up writing many times, but I just can't. At some point along the way, I just decided to stop fighting the current and go "all in."

Sure, I've made some mistakes along the way. But overall, I wouldn't change anything.

How much of your personal life and beliefs wind up in your writing?

Probably more than I'm willing to admit or could even recognize myself. This question actually has relevance in many different layers. To begin with, I'd like to believe that the noble characters in my works are reflective of me. However, I think a lot of the nobility that I or anyone writes about is more theoretical than anything we've put into practice or have experience with. It's one of the sad tragedies of the human condition that we're able to perceive moral propriety and admire the beauty of compassion, but we sometimes lack the ability to actually render those noble philosophical concepts into reality.

When I was in Peru I saw a lot of poverty and I did the best I could to help as many people as I could, but I simply lacked the resources to save everyone. In addition to that moral quandary, you have to consider whether the acts you are performing are even beneficial in the end. For example, I learned quickly that it was no good giving change to street children since they just gave it to their "handlers" who used it to buy drugs. If you want to give something to a street kid, go into a local market and buy a turkey sandwich or something. Sure, you haven't solved the problem, but at least you haven't contributed to the dark side of it. In the end, I felt the best way for me to help out was to educate people, so I spent a lot of time teaching in poor areas. Unfortunately, my degree is in English (although that was pretty helpful to many of them). Still, I often lamented that I never took a course on how to make a cheap and efficient water filtering system using only local materials or something useful like that.

People often reflect that it's the evil characters in novels that are more interesting than the good ones, and I think that's probably because the ones telling the tales have more true experience in evil rather than good. Not because writers are evil, but because we're mortal and on a daily basis it's abundantly clear that you could be helping more people if only you could figure out how. In the end, we all do the best we can, and we probably shouldn't really beat ourselves up so much (but we still do).

So I guess to answer your question: the good characters in my novels represent my noble but probably unrealistic perception of what is "good," and the "evil" characters represent specific situations in which I have fallen short of the person I think I should be (and, for which, I constantly punish myself for...maybe unfairly...maybe not).

Tell us how long you’ve been writing and what prompted you to write fantasy novels.

I've been writing stories from the moment I first figured out how to make letters. The other day I was going through some old things and I was kind of embarrassed to find box after box just filled with notebooks jam-packed with my nearly illegible handwriting. It was one of those situations where I was able to view things as if from outside myself, and the first thing that went through my head was, "this guy's a psycho...just LOOK at all those notebooks!" The worst of it is that I can't even read anything I wrote since my handwriting is so bad (none of it's probably any good anyway, in my experience, you should just throw away about 95% of what you write).

Honestly, if I don't write something every day then I get a little bit twitchy. It's sort of like cutting your fingernails, if I don't get the words out of my brain I just can't relax.

I've always enjoyed fantasy just because you can do whatever you want in it. Sometimes I think people make a little bit too much fuss about the difference between genres. They're all just words in the end after all, and if you like the book it's because you like the characters. The nice thing about fantasy is that you're allowed to use more colorful words. You can have red dragons and blue oceans and green forests and your readers can immerse themselves in a vibrant cartoon world that is a magnified and enhanced version of their own dreary (probably urban) reality. I think most people pick up a book in order to escape into something more beautiful, and although the grayscale of an urban environment can be beautiful too, I'm just the kind of guy that's drawn to color.

Your most recent novel, THE BONE SWORD, was just released. Tell us all about it. 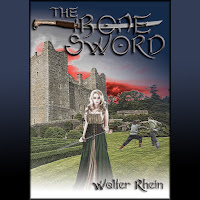 "The Bone Sword" is a straight piece of pursuit fiction that is designed to keep the reader entertained and the pages turning. It's one of those books that's got a lot of battles, and action that is designed to get the blood boiling. My hero, Malik, is a deeply troubled fellow who is constantly in the grips of self-doubt. I hadn't thought about it before, but I guess he's a little bit like Batman in a way. He doesn't hesitate to do what he thinks is right even if the consequences could be extremely bad for him. Unlike Batman, however, he's not afraid to use lethal force.
What does the future hold for you?

I've got another project in the works with Rhemalda called "Birkie Fever" which is a travel memoir about cross-country skiing. I'm really excited about this book and I'll be going through the edits with Rhemalda in the upcoming months.

I'm also working on a sequel to "The Bone Sword" which will probably be published in April of 2012.

I'm currently living in the US, but my wife and I would like to get on the road again as soon as possible. We'll definitely be heading to Peru in the summer of 2011 to see the extended family and show off our lovely daughter Sofia who was born in July of 2010.

What kind of a career do you hope to have?

I've thought about this a lot. I think many people are under the impression that once you get a book deal, it's all gravy, as if cash just comes raining down from the skies. While that might be nice if it were true (it might not be nice too...odd as that is to think), the truth about writing is that at the end of your career, I'd guess most writers, even very successful writers, are only paid about a penny for every hour of work they do over their lifetimes.

Honestly, I feel very happy to have been fortunate enough to sign a couple book contracts over the last few years since it's been just enough to justify, at least in my mind, the huge amount of effort I've put into learning to write. Even sitting here typing this I can't help but kind of chuckle since writing is such an absurd activity to pursue.

All I want out of this is to be able to pump out a couple books a year that entertain people. They don't have to be regarded as masterpieces, they just have to be effective and people have to like them. I'm willing to live cheaply to pursue this, but with the arrival of my daughter, my perceptions of the world have changed. Five years ago I would have told you that I would be willing to live under a bridge and I'd be happy too as long as I had a mechanical typewriter. Now, however, my darling little girl needs to be kept warm, dry, and well-fed.

What I'm trying to say is that my goals as a writer aren't to become rich and famous. I'm in this for the long-haul. For me, writing is a regular 40+ hour a week job for minimum wage, and I'm 100% happy with that since it's all I want to do.

What are the addresses of your website, blog, and other online presences?

I have a blog about Peru that's fairly popular called "Streets of Lima" at:  http://streetsofperu.blogspot.com/

This page has a Facebook group called "Expatriates of Peru" which gets a monthly newsletter. You can join here:  http://www.facebook.com/group.php?gid=128685107970

I also have a Fantasy blog called "Swordreaver" at:  http://walterrhein.blogspot.com/

This page has a Facebook group called "Heroic Fantasy" which also receives a monthly newsletter. You can join here:  http://www.facebook.com/group.php?gid=108822105819999&ref=ts

I also have a blog about running, bicycling, and skiing called "CyclovaXC" at:
http://www.cyclova-xc.blogspot.com/

This page has a Facebook group with a bi-monthly newsletter. You can join here:
http://www.facebook.com/group.php?gid=158112686030

I also appear from time to time on the Rhemalda blog at:  http://www.rhemalda.com/info/

Thanks so much for taking the time to interview me!
Posted by LINDA FAULKNER at 8:00:00 AM