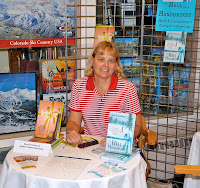 Beth Groundwater's "past" includes stints as an military brat, gardener, skier, software engineer and project manager, wife, mother, and possessor of several college degrees. She lives in Colorado where she writes to her heart's content--now that she's "retired," that is. The second book in her mystery series about gift basket designer, Claire Hanover, was released in March to much acclaim.

You started writing as a child. What prompted your Freddie stories?

I wrote my Freddie stories when I was in fifth and sixth grade because I was an avid reader of Nancy Drew, the Hardy Boys, and action-oriented children’s books, too. My protagonist, Freddie, had all sorts of wild adventures, including visiting an underground mole city after burrowing down in a giant screw-mobile. Freddie was a boy, because back in the sixties, I thought girls weren't supposed to have adventures. I know better now! My amateur sleuth, Claire Hanover, has all sorts of adventures.


Your two published books are mysteries. Do you prefer reading and writing mysteries to other genres?

I read a wide variety of genres, including mystery, mainstream/literary, women’s fiction, romance, and science fiction, so it was hard to pick one. I first wrote mainstream short stories, then I wrote a futuristic romantic suspense novel that never sold. Then I wrote a science fiction novella, which I finally found a publisher for years later. Titled The Epsilon Eridani Alternative, it will be released this November by Virtual Tales in eBook, eSerial, and paperback form. Once I wrote A Real Basket Case, however, I knew mysteries were for me. I’m a puzzle person (crossword, Sudoku, jigsaw, you name it) and writing a mystery is designing a puzzle for your sleuth and the reader to solve.


How does your degree in psychology help you with character development?

I wondered about myself as a college student when I double-majored in the two majors that seemed to attract the weirdest students on campus, Software Engineering and Psychology. But, I was interested in math/logic/computers as well as in how the human brain works, and I couldn’t choose one or the other. I applied my computer science degree to my career as a software engineer, and now I’m applying my psychology degree to my career as a mystery author.

There are two main character motivation problems that I think a writer of amateur sleuth mysteries must tackle, and I use my psychology training to come up with realistic solutions to both. The first problem is why the killer was driven over the edge to kill someone. In murder mysteries, the murders are premeditated for the most part, and people need a really good reason to plan to kill someone. Also, someone who’s willing to plan to take a life is not “normal” and should have some underlying psychological pathology.

The second problem is why the amateur sleuth is trying to solve the murder versus just turning the case over to the police like any sane person would do. In Claire’s case, every book will put a member of her family or a close personal friend at risk, so she’s forced through love or loyalty to solve the crime. Here I use the psychology of strong, mostly healthy relationships to motivate her. In A Real Basket Case, police accuse Claire’s husband of killing the massage therapist, and her husband accuses her of having an affair, so her marriage is on the rocks. In the sequel, To Hell in a Handbasket, the sister of Claire’s daughter’s fiancé is killed, and Claire begins to think her daughter’s life is in danger.

To not give up in the face of relentless rejection! I have hundreds of rejection letters from agents and editors on my short stories and novel-length manuscripts stashed in my files. But, if I hadn’t persisted and kept on submitting, I never would have become published. To keep my spirits up through the process, I networked with other writers who were going through the same thing. It’s important for aspiring authors to realize that rejection letters aren’t personal and that all writers get them during all phases of their careers. They’re something you have to accept and, if you’re given feedback, to learn from.


What is the title of your most recently published book? Briefly tell us what it’s about and let us know where we can buy it.

My May release, To Hell in a Handbasket, and takes place a few weeks after the events in A Real Basket Case. Colorado Springs gift basket designer Claire Hanover takes a spring ski

vacation in Breckenridge, Colorado, with her family. The vacation goes to hell in a handbasket when the sister of her daughter’s boyfriend is killed on the ski slope. Others think an out-of-control snowboarder slammed into her, but just before the ski patrol arrived, Claire saw another pair of ski tracks that veered into the young woman’s. Claire passes her findings on to an initially skeptical sheriff’s detective. Confusing clues point to alternative scenarios for the young woman’s death—which was definitely no accident—and put Claire’s daughter, Judy, in the path of danger. As the spiral of intrigue winds tighter and other deaths occur, Claire must draw on inner reserves of strength to conquer not only the conspiracy but also the winter elements, and like a mother bear, she must fiercely protect her independent-minded cub from harm.

Your blog readers can buy the book on-line from Amazon, Barnes & Noble, and other book sale sites or order it from their favorite local bookstore.

I just signed a two-book contract with Midnight Ink for the first two books in my new Mandy Tanner river ranger mystery series. Mandy is single and in her twenties, lives in Salida, Colorado and works on the upper Arkansas river, the most popular river for whitewater rafting in the United States. The first book is already written and is titled Wicked Whitewater. It is scheduled to be released in early 2011. I’m drafting the second one now, which is tentatively titled Evil Eddies.

I will probably continue to write books in the Claire Hanover gift basket designer mystery series for Five Star. However, because of the way they do business, their mystery series authors are on about a two-year cycle, and to keep your name in the public eye, you really need to publish at least a book a year. So, my hope is that after getting the first two Mandy Tanner books written, I can alternate writing books in the two series. Hopefully, that will keep my writing fresh.


Writers, especially new writers, are always looking for tips and helpful information. What is the single most important “tip” you can give to a new writer?

Networking with other writers is one of the most important things you can do for your writing career. I present workshops at writing conferences and write articles on how to network and why you must do it. Also, being in a critique group helps you improve your writing to the point where it becomes publishable. In my initial critique group of five brand-new fiction writers, three are now published in short stories, three in book-length fiction, and all five have won or placed in writing contests.


Tell us how you benefit from the numerous writers organizations in which you have membership.

I belong to Pikes Peak Writers, Rocky Mountain Fiction Writers, Sisters in Crime, Mystery Writers of America, and the Short Mystery Fiction Society. I learned a lot about the craft and business of writing from the workshops, meetings, email loops, book referrals and other sources of information that came from these writing groups. From fellow short story writers, I obtained leads on e-zines and print magazines that were open to fiction submittals from new writers. By following those leads, I was able to publish eight short stories that could be cited in my query letters.

When I was ready to query literary agents about my polished, second novel-length manuscript (A Real Basket Case), I learned that the best way to find agents whose tastes matched my work was to trade information about agents, and what they said in rejection letters, with other writers seeking representation. And the best way to approach a literary agent was through referrals from published authors they represented. I got to know those other writers and published authors not only through face-to-face discussions, but also through email loops and on-line social networking groups.

I met my editor and both my first and second literary agents through networking with other writers in the writing groups I belong to. At a minimum, I recommend that fiction writers should join three groups: a critique group, a local writing organization that offers monthly workshops and other learning opportunities nearby, and the professional organization for their genre. And volunteer in those writing organizations to make even more connections!


Do you have any upcoming book signings or appearances? If so, give us all the details.

I’ll be attending the 2009 Bouchercon conference in Indianapolis, Indiana during October 15-18 and will be signing copies of my Claire Hanover gift basket designer mystery books there. To find out about future appearances, your readers should check out the Appearances page of my website (see below).

Being in a book club myself, I love to meet with book clubs either in person or remotely via speakerphone or Skype to discuss my books, so if any of your blog readers are interested, they should let me know via the “Contact Me” form on my website. Also, if they sign up for my email newsletter, they’re automatically entered into a contest for free mystery books.


What are the addresses of your website(s) and blog(s):