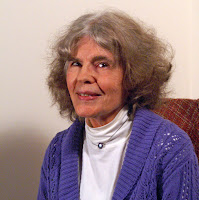 When you begin writing, you seldom have an in-depth outline of plot or character. What are the drawbacks of having too much detail in mind when a writer begins a project?

In part, it’s a reaction to all the term papers I had to do in college and grad school! But mostly I don’t outline—other than a general idea of victim, sleuth, and “who dunnit”—because I love the surprise that comes at the end of each scene. What the characters suddenly decide to do: someone jumps out a window, or a new character slams into the room to upset the tea kettle. I believe a writer should stay open and ignorant and allow new ideas and events to emerge and startle.

You clearly don’t believe in writer’s block because you always quit writing just before the end of a scene and then make notes about where/how to resume. Why do you think other writers have writer’s block? Do you have any tips to avoid it?

I can’t say I don’t ever have writer’s block—I broke my arm this spring and that slowed me up! But in general, no. In addition to the post-scene notes, I read over what I wrote in my last session, and that usually sparks new writing. It might be fear that keeps some writers from writing…and if one takes too much time away from work, the fear grows: “Help! I’ve lost my focus…” And the writer retreats to the refrigerator. Well, I confess: this has happened to me now and then. But a second cup of coffee helps, along with the act of writing—any writing, about anything—to restart the engine.

How valuable is a good agent? How harmful is a bad agent? Does a writer really need an agent?

Valuable, yes! I’ve had three good agents—the first found a publisher for my debut (non-mystery) novel—then quit to start an antiquarian bookstore. The second sent a ms around, died, alas—and the ms was lost. Acting as pseudo agent (see my website), my husband sold my first mystery novel to St. Martin’s Press. I “fired” him, found a new agent, who got more money for the next four—she earned her 15%! But now I’m going it alone with Perseverance Press, who gives me superb editing and lavish book promotion. So a writer only needs an agent, it seems, for the large publishers.

Along with other books, you’ve published ten novels—most of them in contemporary settings. What made you decide to write an historical novel?

I’ve always been fascinated by the 18th-century: its idealism, its revolutions calling for liberty and equality. And I discovered Mary Wollstonecraft (1759-1797) who wrote A Vindication of the Rights of Woman, in which she cried out for a woman’s right to divorce, to cultivate her independence, for equal education with boys—in short, for “Justice for one half of humankind!” I was intrigued by her fiery, unconventional life in Ireland, England, and in France where she lived and loved during the excesses of the Reign of Terror. Although her lover abandoned her, and she scandalized society as an unwed mother, she ultimately faced life with zest and good humor. Sadly, she died shortly after giving birth to the future Mary Shelley who wrote Frankenstein. But I knew I had to write about her life—in her persona.

In addition to writing mystery fiction for adults, and non-fiction, you also write YA. Tell us about that market and the books you’ve written.

I’ve published YA short stories in Seventeen and elsewhere, and in three novels. I guess the age group appealed to me because I’d taught young adults for years and had four of my own—all so conflicted and vulnerable! Down The Strings (E.P. Dutton), came about when my teenage daughter invited a few girls to a slumber party and 200 showed up, along with a rock band. Oh, the damage! As punishment, I made her put the event on tape—it became chapter four; I cast her as a puppeteer’s kid, who feels everyone is pulling her strings. She was also in The Pea Soup Poisonings, a novel that won the ’06 Agatha Award for Best Children’s/YA. A sequel, The Great Circus Train Robbery,was an ’08 Agatha finalist, inspired by an engineer who rode into my life along with his model rail cars, one of which rumbles daily under my reading chair.

Tell us about your most recent book.

In Midnight Fires, Mary Wollstonecraft is a rebellious 27-year-old governess for the daughters of the notorious, aristocratic Kingsborough family in Ireland. To Mary, their Mitchelstown Castle is a Bastille, and her employers proud and contentious. Lady K wants Mary to teach embroidery and the pianoforte; she wants to teach them Shakespeare and to think for themselves. Of course there’s a mystery when Lord K’s womanizing half-brother is stabbed, and rebel peasant Liam is charged with the crime—Mary rises to his defense. To me, the real life Mary W., who deplored sham and injustice (she had earlier kidnapped her own sister from an abusive husband), proves a terrific sleuth. Publishers Weekly (to my great joy) calls the novel “captivating.”

What are the addresses of your websites and blogs?

http://www.nancymeanswright.com/
“Becoming Mary Wollstonecraft” on Facebook.
(Or see my publishers’ URL: Daniel & Daniel/Perseverance Press)
Posted by LINDA FAULKNER at 9:00:00 AM